Check out what Adrien of MSN North America wrote about Spiders

Retro hard rock/garage rock/metal from Sweden. Where else? 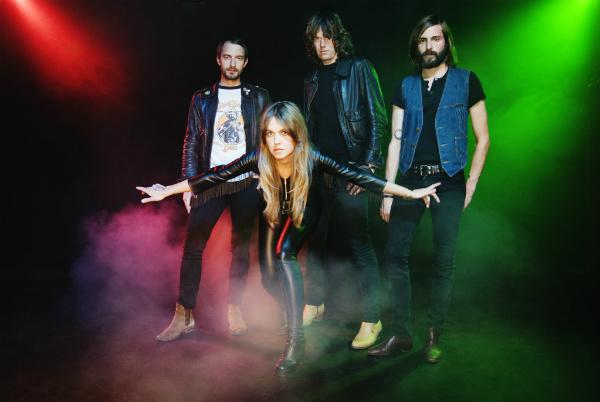 I’d first heard of Spiders earlier this year when they put out the scorching “High Society” single on Kemado Records, and throughout the year that tune stuck around to the point where it ranks as one of my favorite hard rock tunes of the year. So what do they sound like, you ask? Well, they’re from Sweden, they were formed by members of Witchcraft (guitarist John Hoyles) and Graveyard (drummer Axel Sjöberg), and they’ve recorded with Don Ahlsterberg, who’s best known for working with fellow Swedes The Soundtrack to Our Lives. In other words, they’re firmly rooted in the heavy/psychedelic rock on the late-‘60s and early-’70s, with a knack for gritty garage rock alongside the heavier riffs that sets the band aside from Witchcraft’s proto-doom and Graveyard’s more blues-drenched jams. What knocks this particular project out of the park, however, is the presence of singer Ann-Sofie Hoyles, who boasts a powerful voice that feels like a cross between Grace Slick and Mariska Veres, with a little Suzi Quatro attitude thrown in, adding a great amount of personality to tracks that so faithfully mine the sounds of The MC5 and the Nuggets compilations.
So far Spiders have a total of six songs released. The US releases of “High Society” (b/w “Gracious Man”) and“Nothing Like You” (b/w “Long Gone”) actually come from the band’s self-titled debut 10” EP, which was released in Sweden back in January. Most recently, the band issued a new 7” single on Denihil Records out of Sweden, and it’s a good one, featuring the hard rocker “Fraction” as well as a fun cover of Alice Cooper’s “Under My Wheels”. I’ve yet to hear any word about a forthcoming full-length album yet, but the buzz around Spiders has been growing all year - Sjöberg’s commitment to Graveyard resulted in his being replaced by Ricard Harryson - and they’ll be performing at the prestigious Roadburn Festival next April. What started off as an interesting retro curiosity has turned into one of the bands to watch in 2012.
Upplagd av De:Nihil Records kl. 09:04